Soundness test of cement is done to ensure that cement doesn’t show any expansion after hardening and to find out the uncombined lime in cement (excess lime). In simple words, this test is conducted to check “unsoundness of cement”

Causes of Unsoundness of cement:-

How to prevent unsoundness in cement:-

Gypsum is added in cement while production to control the rate of hydration in cement. The quantity of gypsum added will vary from 3 to 5 percent depending upon C3A content. If the addition of gypsum is more than that could be combined with C3A, an excess of gypsum will remain in the cement in free state. This excess of gypsum leads to an expansion in the hardened state.

Different types of tests on Cement

How to calculate Unsoundness of Cement or soundness test of cement: 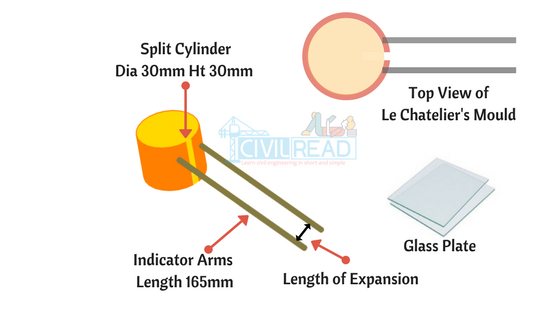 It consists of a small split cylinder forming a mould having dimensions of internal dia 30mm and height 30mm. On either side of the split cylinder, two parallel indicating arms with pointed ends of length 165mm is attached.
Remember, Lechatlier mould is a split cylinder (opened Cylinder)
Indicator arms determine the expansion of cement.

How do indicator arms determine expansion of cement?

Well, as mentioned above the mould is split cylinder which means that, if cement starts expanding the length is increased by calculating the difference between the two lengths the expansion of cement is found.

A good cement (OPC, PPC, Rapid hardeneing etc) should have not more than below expansion limits.