Concrete is a composite material consisting of cement, sand, and water in suitable proportions. The chemical interaction between cement and water binds the aggregate. Fresh concrete will be plastic so that it can be molded to any desired shape and compacted to form a dense mass.

Concrete should be placed in a position before it starts losing its plasticity. The time at which concrete completely lost its plasticity and became hard is called the final setting time of concrete.

Want to learn about the Initial and final setting of cement check out here:

Curing plays a vital role in concrete strength development and durability. After adding water to the concrete mix (Cement, Sand & Aggregate), the exothermic reaction (hydration) takes place, which helps the concrete to harden. Hardening of concrete is not instant and continues for a longer period, which requires more amount of water for processing hydration. So, the concrete kept moist until the hydration reaction in concrete completes. This process called the curing of concrete.

Curing is the process in which the concrete kept moist to protect it from loss of moisture due to atmospheric temperature and hydration reaction.

Curing is the process of controlling the rate and extent of moisture loss from concrete during cement hydration.

Purpose of Curing of Concrete:-

The reaction between cement and water is called hydration. It is an exothermic reaction (the reaction which releases heat).

After adding water to the concrete mix, hydration starts, which makes the concrete to dry out quickly due to an exothermic reaction which releases heat. To complete the hydration process, concrete is kept moist to attain the maximum strength of concrete as soon as possible.

As there are many frequently asked questions about the curing of concrete. Below are some of them

Procedure for curing of concrete :

What is the curing period of concrete?

The minimum period for curing concrete to attain maximum strength is 28 Days.

For a clear understanding, check the below graph. 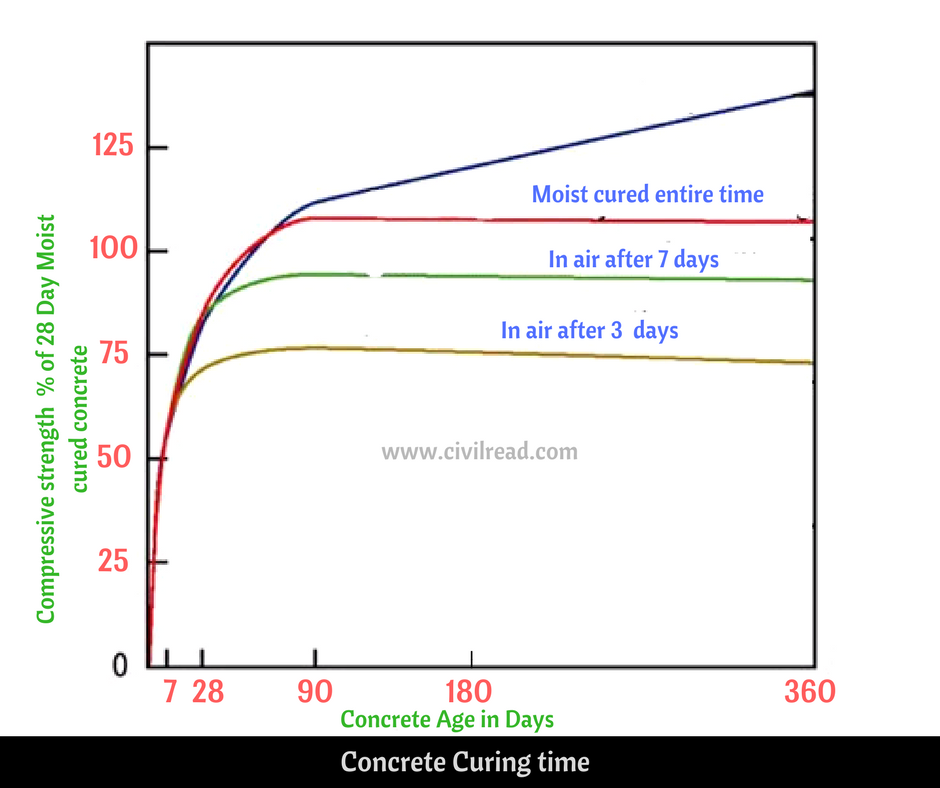 The early strength of concrete is most important, and it is responsible for the ultimate strength of concrete. We should do proper curing by considering the environmental conditions, type of structural members, atmospheric temperature. Maintaining the proper temperature also plays a vital role in concrete as mentioned, it should not be colder than 50C. Concrete is kept moist for at least 28 days. Nowadays, due to lack of time, the curing can be achieved by following modern techniques in 14-20 Days. Nevertheless, it is always advisable to keep concrete moist for at least 14 days.

The curing time or period of concrete is dependent on the following factors:

Below are the most important techniques which are prominently used all over the world.

This method adopted for floor slabs. The concrete surface divided into small ponds, and these ponds are filled with water continuously for 14 days. 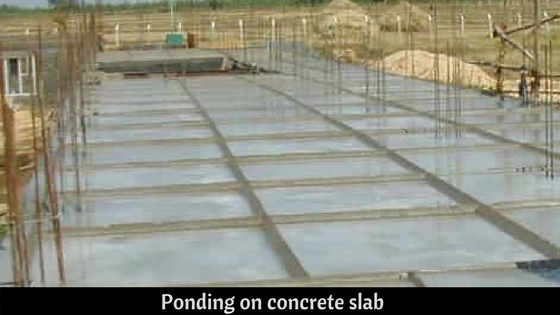 This type of method performed for columns, footings, and the bottom surface of slabs, where ponding is not possible. Impermeable coverings like gunny bags or hessian are required to cover the concrete; these membranes sprayed with water to keep the concrete moist. 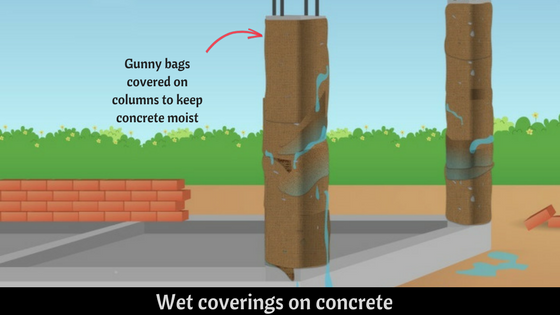 Different curing compounds are available to achieve the Membrane curing out of them, below four methods are essential and widely used.

Synthetic resin is a compound that forms as an impermeable membrane on a concrete surface to resist the water evaporation from concrete.

To proceed with further plastering, the synthetic resin membrane can be easily removed by spraying the hot water on the concrete surface. Hence it is suitable at areas where subsequent treatment applied to the concrete.

The best part of Acrylic based curing compound is there is no need to remove this compound for plastering. Acrylic helps to achieve excellent adhesion to plastering.

Wax curing has similar properties of synthetic resin. The usage of wax on the surfaces to be painted or tiled is not recommended because wax hampers the adhesion between surface and plastering or tiling.

This procedure is adopted at a Precast concrete plant where the concrete members are mass-produced. Steam has heat moisture in it, and it is sprayed on the concrete surface to keep concrete moisture and also increases the concrete temperature, which eventually quickens the pace of hardening concrete. 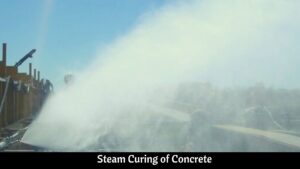 5. Curing of Concrete by infrared radiation:

This method is adopted in cold climatic regions. In this procedure, the infrared radiation is applied to the concrete, increasing the initial temperature, which increases the strength of concrete. This is the most effective method than steam curing, as raising the initial temperature in concrete does not decrease the ultimate strength of concrete. This technique is adopted for the hollow concrete members where the heaters are placed in concrete members which emit the temperature of 900 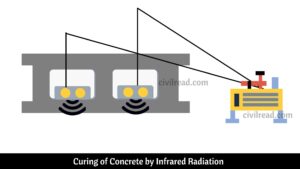 6. Curing of concrete by an Electric Current:

In this method, the concrete is cured by passing an alternating current to it. Two plates, one at top and another at the bottom of the concrete surface, acts as an electrode, and then the alternating current is passed to them. 30V or 60V of potential difference maintained among these electrodes. The curing attained by concrete at 28 days can be achieved within three days by performing this method. 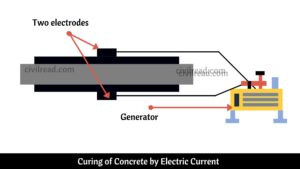 FAQs on Curing of Concrete:

What is the minimum curing time of cement concrete?
The minimum curing time required for concrete to attain maximum strength is 28days.
What are the curing methods?
Ponding, Wet coverings, Membrane Curing, Curing through an electric current, and infrared radiation.
Why is curing required for Cement Concrete?
After adding water to the cement, the hydration process starts which expels heat. Water is prone to evaporation and to achieve the maximum strength of concrete, The concrete is kept moist till the hydration process completes.
When to start the curing of concrete?
Water is to be applied for a few days over the concrete surface soon after its setting because the hydration reactions between cement and water continue for a more extended period due to which hardening of the concrete takes place.

For Instant updates, Join our Whatsapp Broadcast. Save our Whatsapp contact +919700078271 as Civilread and Send us a message “JOIN.”