The bridge is a rigid structure which built on obstacle for providing the passage over an obstruction. The required passage may be for railways, roads, canals, pipelines, etc.
There are different types of bridges each serves a specific purpose and selected at different situations. 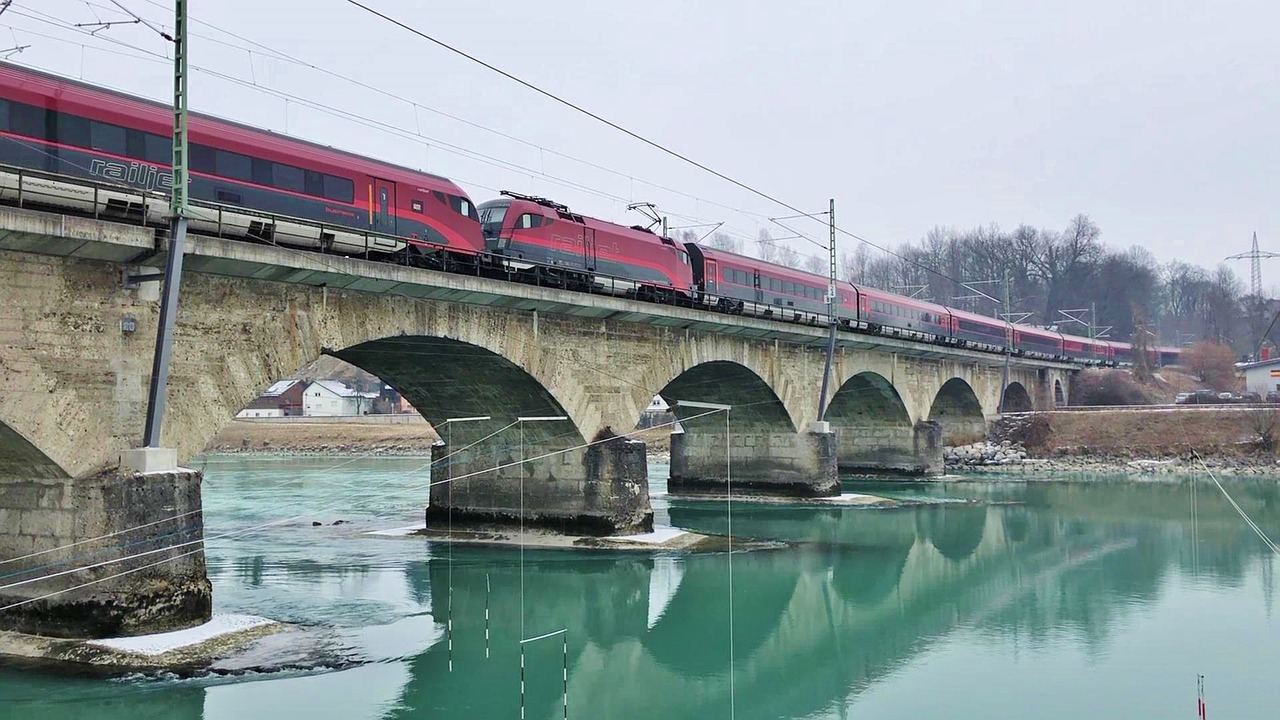 Before getting into the types of bridges ensure that you know about components of the bridge.

Components of a bridge:-

The bridge structure comprises of the following parts.

Superstructure comprises of slab or girder or truss, etc. Super-structure bears the load passing over the passage and transmits the forces caused by the same to the sub-structures.

Substructure doesn’t have enough bearing strength to take the superstructure load directly on it. To support these loads, bearings are equipped. Bearings help to carry the load from the deck and distribute it evenly over the substructure material. 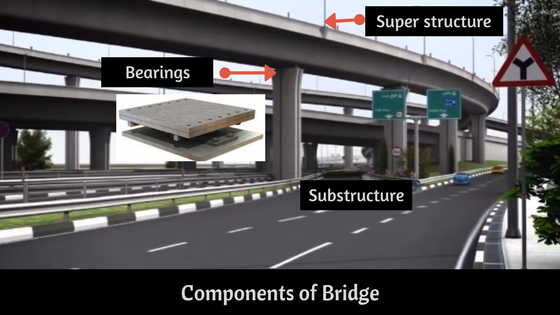 Substructure comprises of piers, abutments, wing walls which are provided to transmit a load of the superstructure to the earth.

Beam bridge is the one which comes to your mind when someone asks you about what is a bridge? 🙂 This is one of the  basic type of bridges.

As mentioned above, beam bridges are simply supported bridges (beam that is supported on piers), where the beam is laid across the supports. In this type of bridges, the beam should be strong enough to bear the loads on it. These loads are further carried to bridge supports and then to earth.

The top edge of the beam possesses compression as the loads are applied on it where the lower part of the beam is being stretched and is under tension. 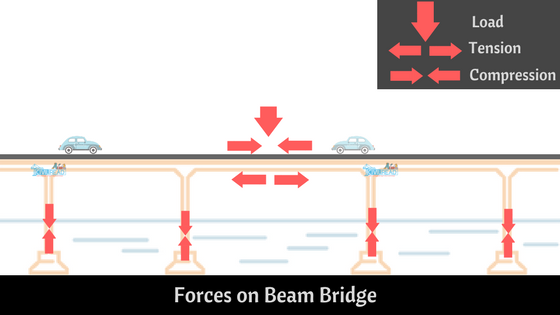 1. Can be expensive, requires RCC to built.
2. They are spanned by limits.

An arch bridge is the most popular type of bridge which is extensively used by ancient Romans.The arch bridge is usually made up of stone, concrete or steel. As the name itself mirroring that, the bridge is in the shape of an arch. An arch bridge is a curve shaped bridge where the load on the curve is not directly applied straight down, but instead, loads are carried along the curve of the arch to the end of supports. Meaning that no part of the bridge takes a high amount of pressure. These supports are also called as abutments. Abutments carry loads of the entire bridge & it is responsible for holding the arch in a precise position. 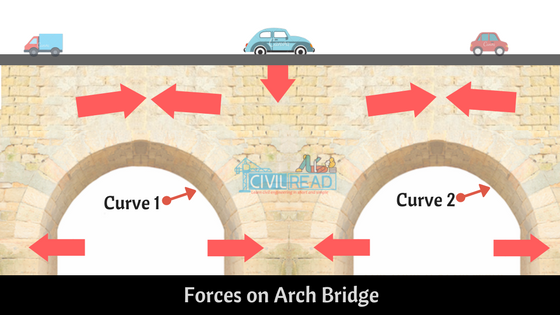 The no. of curves (arches) in a bridge depends on stress and loads that bridge should support. The span length of arch bridges is normally up to 250m, and the roadway of the bridge lies on the arch structure.

1. Easy to build with the locally available material.
2. these type of bridges are very rigid and extremely strong.
3. Arch bridges are built up with a variety of materials like stone, concrete, steel, etc.

1. They take a long time to build.
2. It requires a massive amount of building materials to build.

Truss is a framework consisting of struts (inclined members). These bridges are constructed by using trusses which are comprised of many small elements forming triangular trusses. The span length of truss bridge is in between 50m-110m. 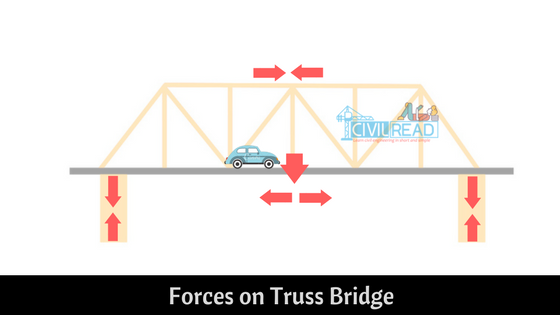 Trusses are very rigid, lightweight and can support heavy loads. Trusses serve in transferring the load from a single point to the wider area. The weight of the bridge is very less when compared with other types.

When the load is applied to the truss bridge, the top edge possess compression and loads are shared among the angled members to supports and then to earth.

1. This type of bridge is easily built in the factory and then framed on site.
2. The piers or supports are comparatively less when compared to the beam bridge,
3. They are strong and rigid and very light on weight possess efficient use of materials.

1. Requires high skilled professionals to design it.
2. They are more complex than beam bridges in terms of designing.

This type of bridges are constructed by suspending the deck slab using suspension cables. The roadway is hanged using steel cables which are connected to two towers and secured by anchors on both ends of the bridge.

In addition to the deck slab, the truss system is also featured with truss system just beneath the deck which helps to stiffen and to keeps the deck in precise position to reduce the tendency of the roadway to sway. 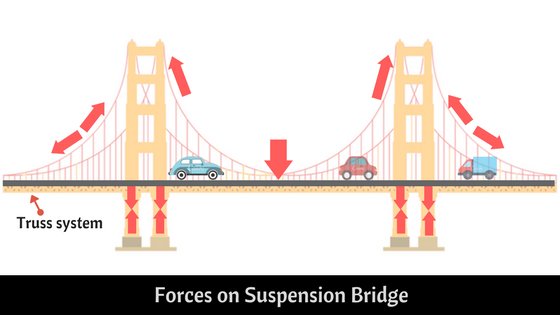 When the load is applied to the suspension bridge, the deck slab possess compression and then travels up the ropes, cables or chains to transfer the compression to the towers. The towers then dissipate the compression directly into the earth by anchors.

The supporting cables which run parallel to the bridge possess tension forces, and these are connected to anchorages. Bridge anchorages are massive concrete blocks which serve in dissipating the tension force to the ground

Bridge anchorages are essentially solid rock or massive concrete blocks in which the bridge is grounded. Tensional force passes to the anchorages and into the ground. The span length of Suspension bridge is in between 150m-2000m

1. Strong and lightweight.
2. These type of bridges provide long span which helps in crossing the river.

1. Expensive to build.
2. Prone to sway and ripple with the wind, so this type of bridges are not suitable for railways.

This type of the bridge are modern bridges and it is similar to the suspension bridge. In this type, cables are connected directly to the tower instead of suspended cables. Tension is constantly acting on the cables, which are stretched because they are attached to the roadway. This type of bridge doesn’t have any anchorages to bear the compression and has only one tower to carry the compression. The span length of Cable stayed bridge is in between 500m-1000m. 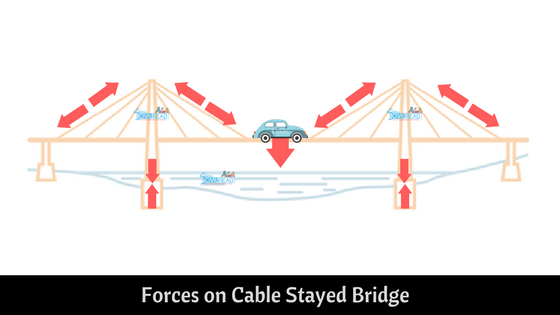 In this type of bridge, the cables are directly connected to the roadway at different points radially, and towers alone bear the compression forces.

1. It is more economical when compared with the suspension bridge.
2. It is good for medium spans and can be easily built by cantilevering out from the tower.

1. Maintenance and inspection may be more difficult.
2. this type of bridges are not suitable for far distances. 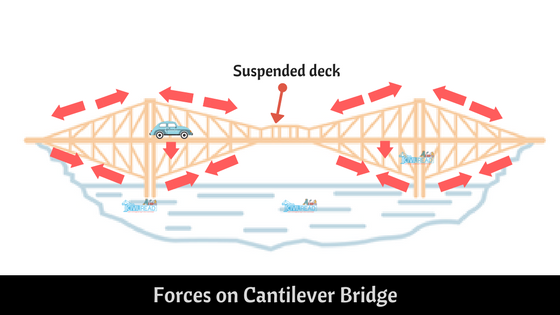 Any bridge is subjected to compression and tension forces. In this type of bridge, the suspended deck is provided to join the two free ends of the cantilever bridge.

1. This type of bridges are adopted only when the supports cannot be provided at specific positions.
2. Support is required only on one side of the cantilever.

1. Cantilever bridges are prone to high turning stress during construction.
2. If the forces aren’t balanced the bridge may buckle.

Types of Woods, Where to use? When to Use? | Building Construction

Never Miss an update Click on “Allow US” and make us allow or Click on Red notification bell at bottom right and allow notifications.
Stay tuned! Many More are updated Soon!!.
Civil Read Wishes you ALL the BEST for your future..