Home
Highway Engineering
Types of Roads or Classification of Roads

What is the Road?

The road is a paved way or a route or a thoroughfare which drives you to reach your destination through vehicles. Roads are classified based on different criteria, each among them is further classified into different types of roads. In this post, I give a brief description of each and every type and terms which you frequently listen when someone talks about roads.  Roads are primarily classified as follows:

Out of above, Road classification based on speed and accessibility and based on materials used is the most important.

Based on Speed and accessibility:

Freeways are wide roads designed for fast-moving vehicles to travel long distances with higher speeds. These are generally designed in four lanes, two lanes in each direction. Traffic movement on freeways is continuous and unhindered because there are no railway or road intersections and no signals.

As mentioned above, access is controlled everywhere in this type of roads the driver never comes in contact with the opposing flow of traffic. To separate traffic from other roads Freeways are accessed only through ramps. Bridges or underpasses are constructed to create a passage for roads which cross freeways. 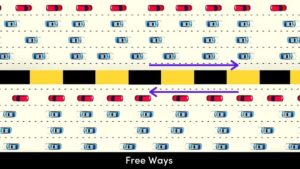 You can see from the above image that there is no obstruction and free flow of traffic in each direction.

Parking and Walking are strictly prohibited on freeways and they don’t have footpaths on either side of roads.

Expressways are one of the superior types of access-controlled roadways where the entry and exit of the expressway are fully controlled by ramps.

As the name itself “express” echoing that these are meant for a free flow of very speed traffic. Expressways are designed to travel quickly with great comfort and safety by avoiding sharp curves, busy traffic intersections, railway junctions.

Vehicles with high acceleration are only permitted in expressways. Heavy load vehicles, cargo vehicles, pedestrians are not allowed.

Parking, loading and unloading are strictly prohibited on Expressways. 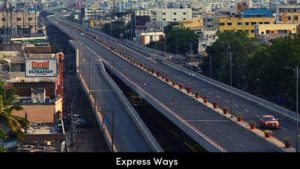 You can see clearly the access is controlled by the left side ramp to join with the expressway.

Highways connect villages to cities or cities to cities or state to state or the roads connect the state capital to the national capital are called highways. Highways are the roads run through the length and breadth of the country. They are generally laid in two lanes. Highways are further classified into National Highways, State Highways, Urban Highways and Rural Highways. We will discuss these types in location and function category. 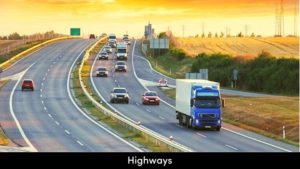 Arterials are the roads laid inside the city or town for the movement high volume of traffic. An arterial road joins the central business point to the outside residential areas. Arterials provide access to the highways.

Pedestrians are allowed to cross the roads only at intersections or at designated pedestrian crossings. The flow of traffic is controlled by a signalling system at intersections.

Parking is not allowed on arterial roads. 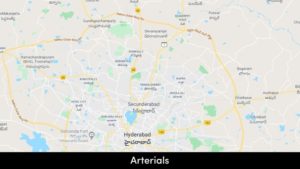 In the above image, white lanes and yellow lanes denote arterials.

Local streets don’t carry a large volume of traffic like arterials. The speed limit is restricted to 30km/hr in a local street. Local streets allow you to properties around it. In simple the road which you to take to reach the nearest vegetable market is the local street. 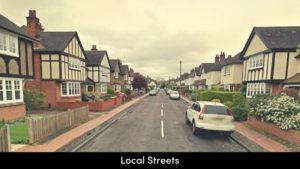 Pedestrians can cross the road at any point in local streets. Unrestricted parking, loading and unloading of vehicles are allowed in local streets. They usually don’t have any divider with boulders but divided with 1m dotted white lines or straight white line.

Collector roads collect and deliver the traffic to and from local streets and arterials. The speed limit usually ranges between 35-55km/hr.

Pedestrians are allowed to cross only at intersections. Parking can be allowed except at peak times. 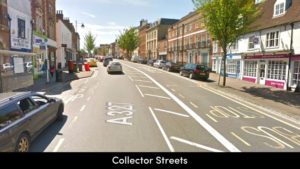 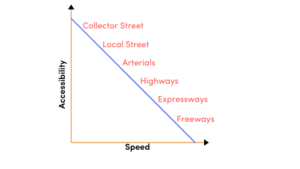 Based on Materials used:

In this category, I’m going to explain different types of roads based on the materials used in the construction of the road.

The roads which are laid with the available soil at the site are called Earthen Roads. These are the cheapest roads among all the roads. Earthen roads are designed for very low volume traffic.

Available soil is laid in two-three layers and surface of the road is compacted with the rammer to expel the excess voids present in the soil. 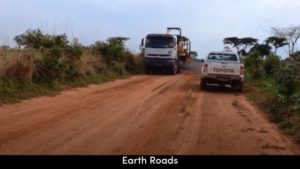 These roads are also called as temporary roads usually laid for moving constructing vehicles while building a structure or for moving army vehicles during war times.

it is not recommended to go with Earthen roads in monsoon as the soil may runoff during rain.

Gravel roads are the second cheapest among all the types of roads and they are also better than Earthen roads. 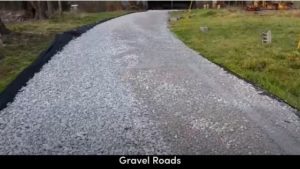 In this type of roads, the mixture of gravel and earth (available soil at the site) is paved on the surface and compacted. Gravel roads are also called as metal roads. These types of roads are easily built and generally laid in villages.

Murram is a gravelly lateritic material which is occurred during the disintegration of igneous rocks by weathering agencies. The roads which are laid using Murram as primary material is called as a Murram road. The density of murram is higher than the gravel which also provides good surface finish and compaction than above two types of roads. 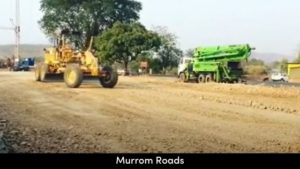 The word Kankar is derived from India which means an Impure form of Limestone. This type of roads usually recommended at places having a good quantity of lime. Kankar road is one of the low-quality roads but better than Earthen roads and gravel roads. 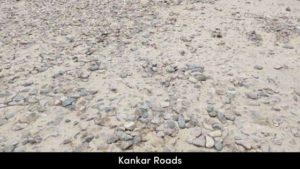 This type of road is also called as WBM road. The crushed stone (aggregate) is used as a base course. WBM roads are laid as layers. Aggregates are spread on the surface as a layer having 10cm thickness, water is sprinkled on each layer and then rolled for a better finish.

These roads are better than the Murram, Earth and Kankar roads.

In cities WBM is usually laid in pit holes.

The bituminous is a black viscous and adhesive material occurred during the distillation of petrol. Bituminous roads are primarily used all over the world which is very easy to lay and provides smooth and good surface finish. The thickness of bitumen road depends upon the subgrade soil at the site. It is always recommended to lay the bitumen roads in two layers. 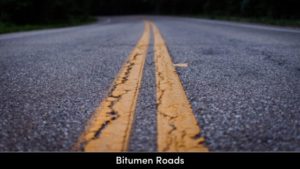 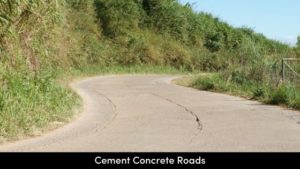 Based on Nagpur classification:

National highways run throughout the length and breadth of the country. These roads connect state capital cities to the national capital city. A minimum of two lanes, one for each direction is provided for National highways and these two lanes are divided by a strip of boulders.

The minimum speed of 80Kmph should be maintained on National highways.  They are usually labelled with numbers NH1, NH70 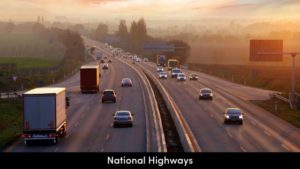 A minimum of two lanes are provided but they may or may not divided with a strip of boulders. 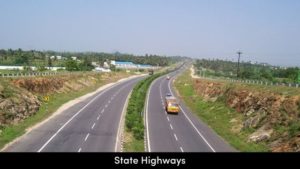 There are two different types of district roads

Minor District roads: These roads connect the important towns within the district to the district headquarters. 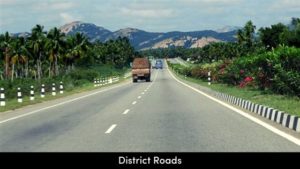 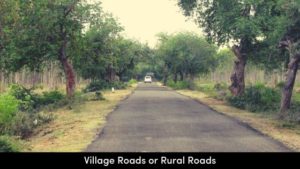 These are the roads which can be accessed throughout the year is called All-weather roads.

The roads which are accessed only during the fair atmospheric conditions are called Fairweather roads. Some roads are opened only during summers and rest all seasons the roads remained closed due to snow on road. These roads are not accessible during heavy rains, cyclones or at the time of floods. 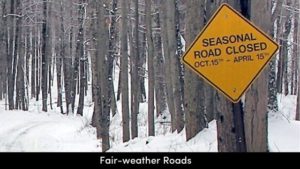 You can see the above road is allowed to permit vehicles only during summer.

The roads which are designed with a hard pavement course such as Cement concrete, Bituminous and WBM are called Paved roads. 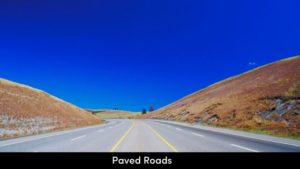 The roads which are not designed with a hard pavement such as Kankar, Earthen or Murram are called unpaved roads. 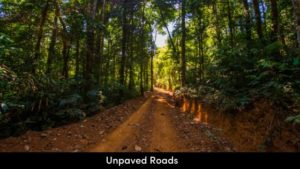 The flexible road has four layers, the outer surface layer is topped with bituminous material which is called as wearing course and an underlying sub-base, base and subgrade course. All these layers make the road flexible. Periodic maintenance is required for flexible roads otherwise it can disintegrate easily with heavy traffic.

All roads except cement concrete roads are flexible roads. 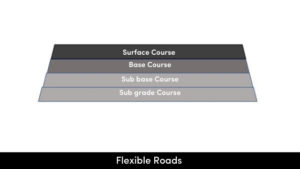 These are the roads with only three layers (Surface course, Base and Subgrade course) makes road non-flexible. Cement concrete road falls under this category.

Flexible roads consist of a flexible layer as a pavement surface, which requires proper maintenance; otherwise, it can be disintegrated easily with heavy traffic. All types of roads except concrete roads fall under this category. 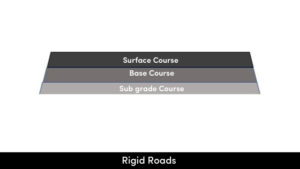 Roads are classified into two types considering topography they are Hilly roads and Plain roads.

The roads which are constructed on hilly areas where one can see frequent steep bends, ups and downs. The capital required is more and it takes more time when compared with the plain roads. 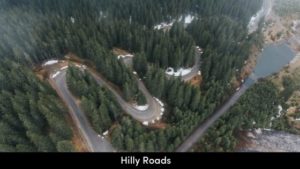 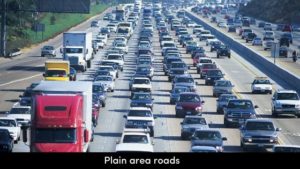 Based on the economy:

The roads which require less capital and can be constructed with the available local soil or locally available materials are called low-cost roads. These roads are preferred where there is very low and pedestrian traffic.

These roads require huge capital to construct. State Highways and National highways are the best examples of the high-cost roads. Bitumen or Cement concrete is used in High-cost roads.

Based on the Volume of traffic:

This classification based on the number of vehicles passing through a specific route.

The roads which are carrying less than 400 vehicles on an average per day is called low traffic roads. Village roads or rural roads are the best examples of this type of roads.

The roads which are carrying on an average of 400 to 1000 vehicles per day are called Medium traffic roads. District roads are one of them

The roads which are carrying more than 1000 vehicles per day is called High traffic roads. National and State highways fall under this category.

Based on traffic type:

The tracks which are built especially for cycles or bicycles are called Cycle tracks. These tracks are provided on both sides of the pavement.

The way or a route built specifically for the pedestrians where any vehicles are strictly restricted are called pedestrian ways.

Motorways are expressways which are built for a free flow of very speed traffic. Expressways are designed to travel quickly with great comfort and safety by avoiding sharp curves, busy traffic intersections, railway junctions. Heavy load vehicles are strictly restricted on expressways.

FAQs on Types of Roads:

WBM road means Water bound Macadam road. The crushed stone (aggregate) is used as a base course. WBM roads are laid as layers. Aggregates are spread on the surface as a layer having 10cm thickness, water is sprinkled on each layer and then rolled for a better finish.

Superelevation and its significance in road design