Concrete is a composite material obtained by mixing Cement, sand, aggregates, and water in suitable proportions. Concrete has become a universal building material which is extensively used in civil engineering construction.

Why is concrete extensively used in civil engineering construction?

As there is no material which competes with the concrete concerning its high compression strength, its flexibility to take any form and shape, highly resistant to fire and no corrosion with negligible maintenance cost.

As we know that, Concrete alone is not used in the construction structure. Reinforced bars are inserted in the concrete to make a structure strong enough.

Why is reinforcement inserted in concrete?

Concrete is very strong in compression but weak in tension. To compensate low tensile strength in the concrete reinforced bars are inserted. Thus the concrete is strengthened by steel, and resultant composite mass is called Reinforced Cement Concrete.

Now the question runs in your mind? Why is concrete weak in tension?
Well, concrete is strong in tension, but compressive nature of concrete is ten times stronger than tension.

Now to be specific, concrete is made by mixing Cement, Sand, water, and aggregate. Aggregate plays an important role to carry compressive forces, and remaining mixture (Cement, Sand, Water) acts as glue to join these aggregates. When force is applied to a concrete member, this glue transfers compressive stresses from one aggregate to another.

In technical terminology, the glue is called as an Interfacial Transition Zone.

When concrete is under tension. The aggregates will pull away from each other. The glue which holds the whole system is significantly weaker than aggregates.

Due to the applied pull force, the glue which holds different constituents of concrete together will break.

So under tension, this zone will act as a weak link and concrete will fail at a lower force.
So, the steel bars are accommodated in concrete for tension requirements as steel have a similar value of compression and tension. 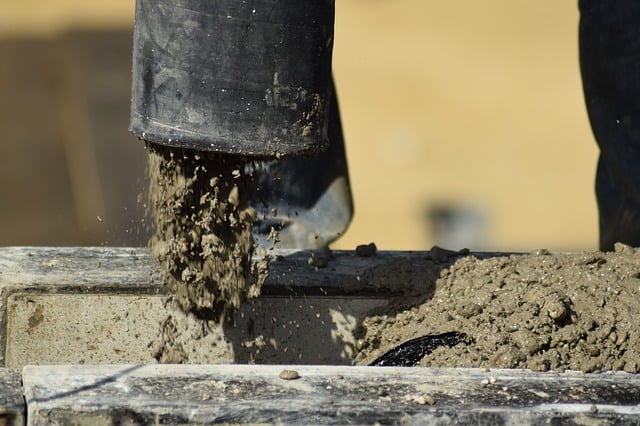 Properties of concrete during its plastic stage:-

The chemical interaction between cement and water binds the aggregate into a solid mass. Fresh concrete will be plastic so that it can be moulded to any desired shape. The Fresh concrete should possess following properties

Workability is a complex property of concrete. The workability of freshly mixed concrete determines the ease and homogeneity with which it can be mixed, placed, compacted and finished. A good workable concrete should not show any segregation and bleeding after compaction.

Workability in concrete possess required lubrication for handling concrete without segregation, and it should be placed in position without losing its homogeneity, compacted with minimum effort and shall be finished easily.

The factors which influence workability of concrete:
1. Efficiency in mixing proportions
2. Water – Cement Ratio
3. Grading of aggregate
4. Percentage of fine materials in the mix
5. Use of admixtures.

We usually perform Slump test to check workability of concrete.

Separation of coarse aggregate from the concrete mix is called Segregation of concrete. A good concrete should show no to less segregation after mixing. Excessive segregation leads to honeycombing and decreasing in the density of concrete and ultimately loss of strength of hardened concrete. 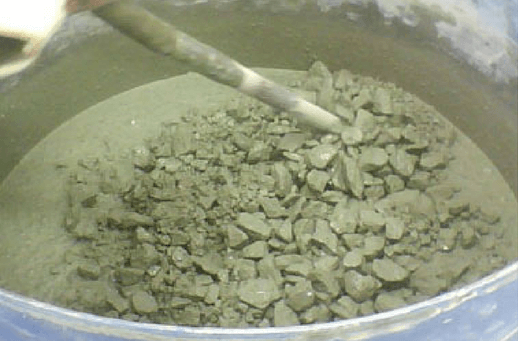 Separation of water from freshly mixed concrete is called Bleeding. A good concrete should possess no to less bleeding. Bleeding makes concrete porous and weak.

Properties of concrete during its hardened stage:

The concrete gains 95% of desired compressive strength within 28days by periodic curing. The hardened concrete should possess following properties;

The strength of concrete is designated as the Characteristic compressive strength of 150mm cube at the age of 28 days when tested with the universal testing machine in N/mm2.
As grades of concrete vary between 15 to 80 N/mm2. These grades differ on the basis of mix proportions.

A good concrete should not fall under less than 5% of desired concrete strength.

For more information about Concrete Grades can be found here

As per IS 456: 2000 the tensile strength of concrete can be calculated from characteristic cube compressive strength.

where Fck is Characteristic Compressive Strength of concrete cube @ 28 days.

As per Eurocode-2 different grades of concrete has following tensile strength values.

Elasticity modulus of concrete is an important property required for computation of deflections of structural concrete members.
Modulus of elasticity is the ratio between Stress and Strain.

As per IS456:2000 modulus of elasticity is obtained by the following relation

As per Eurocode-2 different grades of concrete has following modulus of elasticity values.

When concrete is compressed in one direction, it usually tends to expand in the other two directions perpendicular to the direction of compression.
The change in length is calculated and added to the existing lengths.

Poisson ratio is the ratio of  Lateral strain & longitudinal strain.

Poisson ratio varies between 0.1 for high strength concrete and 0.2 for weak concrete.

The property of decreasing in volume during the process of drying and hardening of concrete is called Shrinkage of concrete. Shrinkage may lead to the surface cracks. An occurrence of shrinkage cracks depends upon the proportions & ingredients of concrete and also environmental conditions. 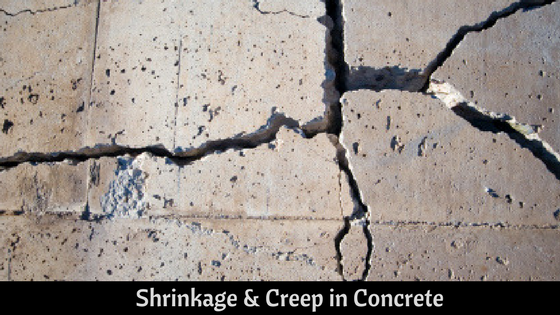 As per IS456:2000 Creep is defined as a plastic deformation under constant load or stress. The creep coefficient is defined as the ratio of ultimate creep strain to elastic strain at various ages of loadings are tabulated below:-

For Instant updates Join our Whatsapp Broadcast. Save our Whatsapp contact +9700078271 as Civilread and Send us a message “JOIN”