Home
STRUCTURE
Different Types of Columns used in Construction. Where to use? and When to Use?

A vertical member whose effective length is greater than 3 times Its least lateral dimension carrying compressive loads is called as a column. Columns transfer the loads from the beams or slabs to the footings or foundations. The inclined member carrying compressive loads as In the case of frames and trusses is called as struts. The pedestal is a vertical compression member whose effective length Is less than 3 times Its least lateral dimension. (different types columns)

Why we provide Columns?


Primarily, Columns carry  Axial Loads and therefore are designed for compression. Other loads from snow, wind or other horizontal forces can cause bending in the columns. Columns then need to be designed for Axial Load and Bending.

Columns are classified into four types:-

Based on Type of Reinforcement:-

Depending upon the type of reinforcement used, reinforced columns are classified into following types:- 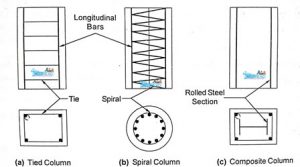 Depending on the type of loading on columns are classified into three types: 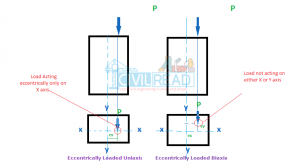 Based on Slenderness Ratio:-

Depending upon the Slenderness ratio (ratio of effective length to least lateral dimension of the column), the columns are classified as (most important)
It is used extensively for finding out the design load as well as in classifying various columns in short/intermediate/long.

STAY TUNED MANY MORE ARE YET TO COME SOON!

For Instant updates-Join our Whatsapp Broadcast. Save our Whatsapp contact 9700078271 as Civil Read and Send us a message “JOIN”

Never Miss an Update Click on “Allow us” or Red notification bell at bottom right corner and allow notification. Stay tuned! More are updated Soon!!.
Civil Read Wishes you ALL the BEST..!