The vibration of concrete and its importance:

Different types of concrete vibrators are used to perform the vibration of concrete. To learn more in detail we start learning about why we perform vibration for concrete

Concrete is the most complex mixture consists of Cement, Sand, and aggregate. Aside from technical properties, Do you know whats the prime objective for mixing these three materials in concrete?

The answer is to fill the voids. Yes!

Aggregates are irregular in size and have voids in it. To fill the voids, fine aggregate is mixed. The same goes for the Fine aggregate (Sand) voids made by them are filled with the cement.

The smallest particle cement also has air voids they filled with the water.

Even after filling the mixture with water, there is a still chance of air traps and water voids in it. The presence of voids in concrete leads to Segregation and bleeding.

It has proven that the voids occupy about 5% to 8% of total volume in freshly mixed concrete.

The principal objective for performing the vibration in concrete is to eliminate those voids and make the concrete free from air and water traps. This process is named Consolidation.

What is Vibrating Concrete? What does it do?

Vibration helps in minimizing the internal friction by randomizing the concrete mixture. Vibration rearranges the cement and aggregate particles in concrete; this helps concrete in achieving the close configuration.

Close configuration expels the water voids and air pockets in the mixture and results in a dense and compact mass of concrete.

Internal vibration or compaction of concrete is performed by using immersion vibrators.

Moreover, the other end of Poker is connected to the power source (electric motor or diesel engine) through a flexible tube. 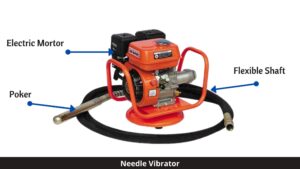 A flexible tube is available in different diameters ranging between 20mm to 100mm, and the length varies from 25cm to 90cm.

Formwork vibrators are also called as Shuttering vibrators where the vibrators are clamped externally at specific points on formwork. The position of these points decided on the thickness and depth of the concrete inside the formwork. 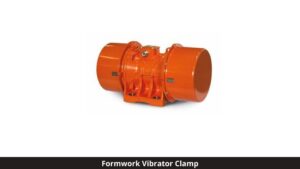 As the vibrators are clamped externally on formwork, the inside concrete mass has a direct effect on it.

Read: What is formwork? 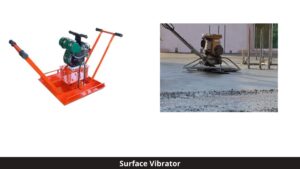 The operating frequency of surface vibrators is about 3000 to 4000 rpm at an acceleration of 4g to 9g.

Surface vibrators commonly used for patchwork in pavement slabs. Dry mixes which have lower water to cement ratio is most effectively compacted with the surface type vibrators.

Shaker can easily fasten to rebar of any size. The device (shaker) slipped at the top of the projected rebar, and the reinforcement bars itself transmits the vibration into the concrete. Rebar shaker compacts the concrete in 5secs to 7secs. The operation time is very less when compared with the other vibrating methods.

The only disadvantage with this type of vibrating is sometimes the lateral ties may disorient and loosen due to the excessive vibration of rebars. 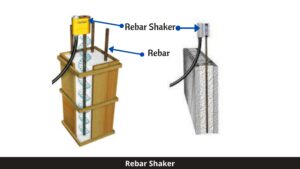 The vibratory table is also called a Concrete Vibration table. This type of method generally chosen for harsh and stiff concrete mixes, and it is a laboratory method.

The rigidly built steel vibrating table mounted on flexible springs. These springs are further connected to Electric mortar, which drives the vibrating table to vibrate the concrete through springs.

The concrete vibrating table has a frequency of 4000rpm at an acceleration of 4g to 7g. Precast industries to make Precast elements use a vibratory table to vibrate the concrete. 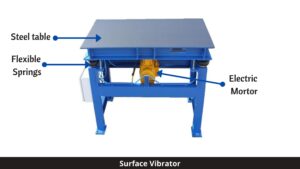 FAQs on Vibration of concrete:

The purpose of concrete vibration is to eliminate trapped water voids and air voids from the concrete.

What is the purpose of Concrete vibration?

The purpose of concrete vibration is to eliminate trapped water voids and air voids from the concrete.

What is the radius of action in vibration of concrete?

What happens if we don't vibrate the concrete?

If concrete is not vibrated properly, the voids and air bubbles makes the concrete porous which inturn makes concrete prone to segregation and bleeding. It has proven that the voids occupy about 5% to 8% of total volume in freshly mixed concrete. Accurate vibration is required to concrete inorder to attain the design strength.

Curing of concrete and Curing methods

Segregation and bleeding in concrete