The different types of tests conducted on bricks are already discussed in the article how to test the quality of brick on site. The Compressive strength test on bricks is done indoors in a lab and requires a specific apparatus to conduct the test.

What is Compressive strength?

Compressive strength determines the load-carrying capacity of a material or an element. To understand clear, Let’s take an example of a boy weighs 12kg sitting on a small chair. The specific chair is made only for kids so that they can sit without any harm. Now say, an adult weighs 60kg sat on the chair, The chair is unable to carry the load of 60kg on it. Hence it will break. Same in the case of Building materials, there is a load-carrying capacity for any material upto an extent, once the limit is met the material starts failing. 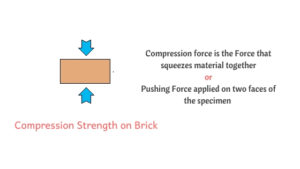 In this test, the compression force is applied on both the faces of brick and the maximum compression that brick can bear without cracking is observed and recorded. 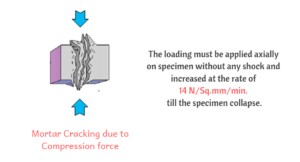 Classification of Bricks based on Compressive Strength:

Below table tabulates the Compressive strength of Brick of different classes:

to remember the classification easily while selecting the right brick , the bricks are classified as

Compressive testing machine [CTM], Three samples of bricks collected randomly from the brick pouch. Cement mortar of ratio 1:1 (1 Part of cement and 1 part of sand), Plywood sheets and trowel to fill the mortar in the brick frog is required.

Formula to calculate the Compressive strength:

Suppose the max load at which the Brick starts cracking = 600KN

The same procedure is adopted and the average value is calculated.

For Instant updates Join our Whatsapp Broadcast. Save our Whatsapp contact +9700078271 as Civilread and Send us a message “JOIN”